Article was covered by The National Airline Magazine

CHHIMI DORJI. Based in Thimphu, Bhutan, he is an independent Consultant on energy, environment and water resources. He was educated in the USA, India, Bhutan and Norway. Chhimi can be reached at chimi6@gmail.com.
Posted by Chhimi Dorji at 2:46 AM No comments: 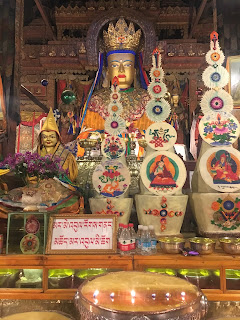 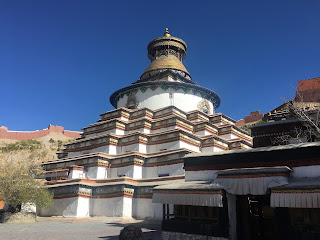 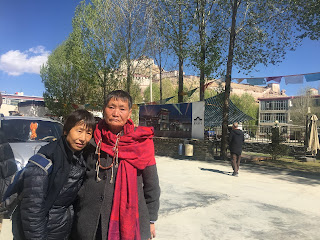 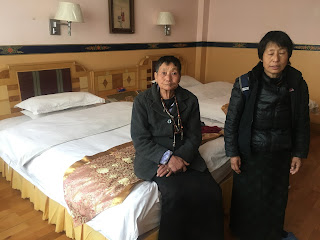 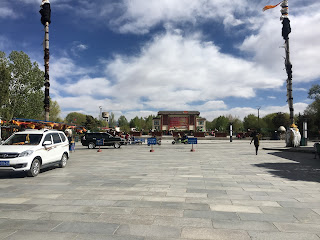 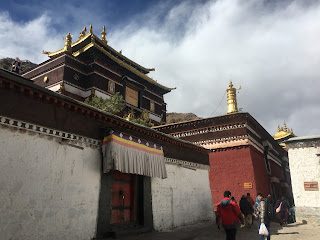 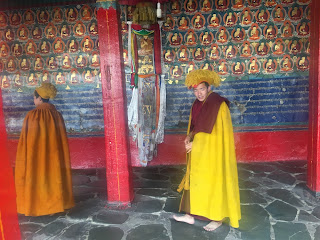 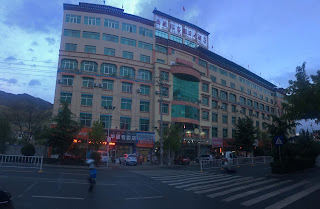 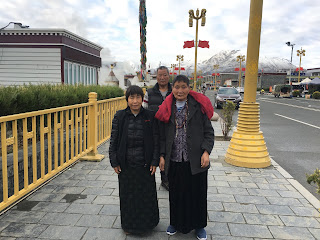 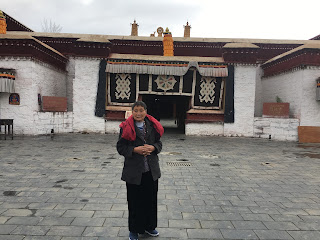 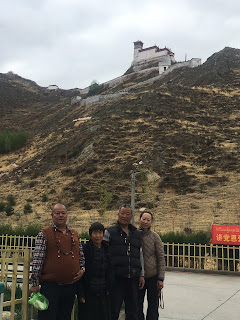 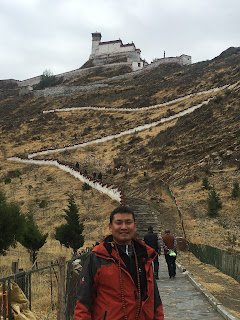 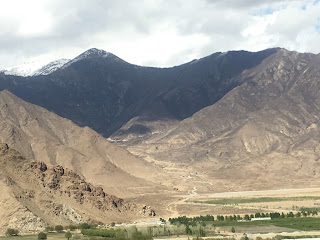 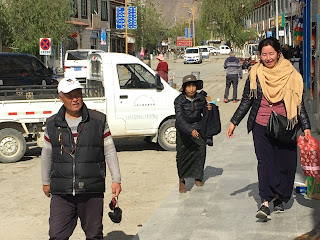 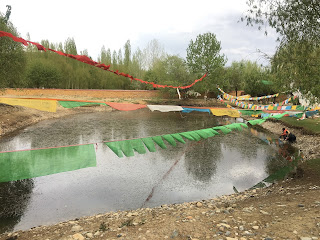 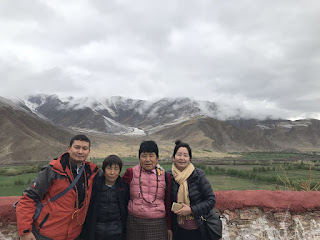 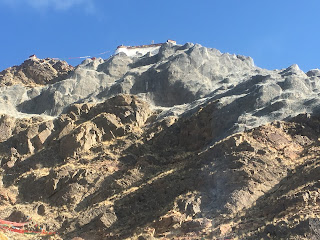 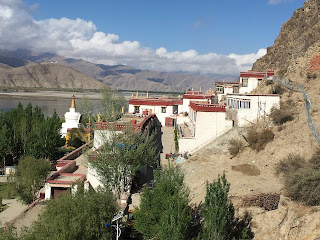 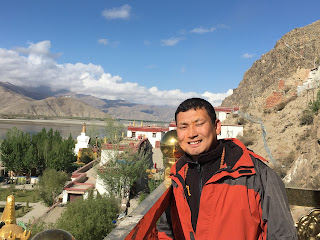 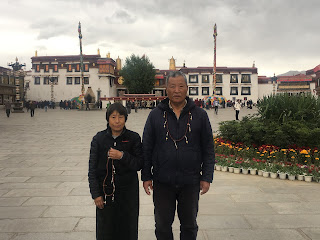 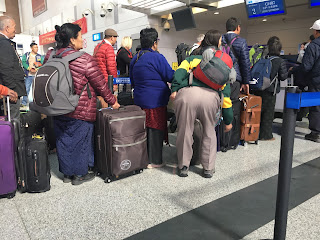 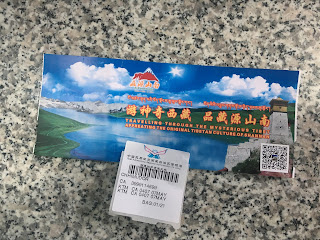 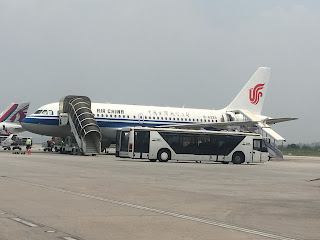 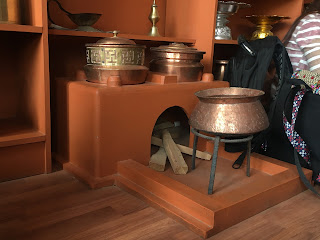 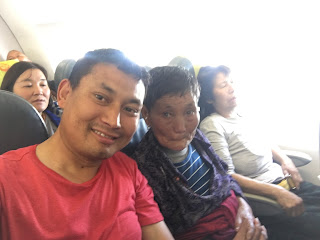 A trip Tibet, that's worth every effort.

Recently we did a trip to Tibet from April 23- May 8, 2017 for 14 days for ourselves and for people who left us. It was enchanting and gratifying in many ways. Not many Bhutanese visit the most culturally similar region of the world and had asked me for reviews. If there is one place outside Bhutan where we can speak Dzongkha and expect to be half understood and everyone knows a “Drukpa” it has to be Tibet. Many a times, I felt we found our long lost cousins of our culture or Architecture or Music!


We visited the most sacred temple in Tibet, the Jokhang in Barkor, Lhasa, which has “Lhasa Jowo”, offered prayers for the loved ones –living and dead. There are scores of people lined up to offer gold paintings and tons of money and food signifying the spiritual peace and content one accumulates. Hundreds of people doing the Barkor Kora chanting manis, and prostrating only adds another dimension to the culture and beliefs. This was followed by a leisurely walk to the Norbulingka Palace, a UNESCO world heritage site which was the summer residence of the Dalai Lamas. It is said that HH the Dalai Lama fled from the Norbulingka in 1959.

Another site was a hike upto the grand Potala Palace, on Marpo Ri – the palace named after Mount Potalaka, the abode of Chenregzig. Potala was the residence of the Dalai Lama and center of Tibet for many years and now a museum and another UNESCO world heritage site. Potala is at around 3700 m and an architectural wonder with magnificent views of the Lhasa valley. Potala can melt anyone’s heart and not just Captain Younghusband of the British Army. The Kushula/Lama at the main chapel “Jowo” of Buddha was happy to notice the Bhutanese group and our incense offerings. We were able to make room for ourselves and offer moenlams right in the main chapel among the crowd of tourists walking by.  It was such a pleasant moment.

Climbing up the Lhasa valley, we were on wide mountain roads ascending to 4770 m Gambala/Khambala pass to view the beautiful Yamdrok Yumtsho. The lake is not only surreal but also sacred and vital for water resource of Tibet with some 680 sq.km area. There were also posing with the giant Tibetan Mastiffs which is almost a meter tall and Yak riding the glorious way with full decorations at 4400m. 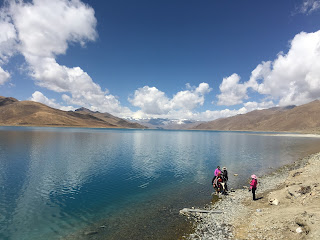 Ralung, the origin of Drukpa Kagyu School stands in between nowhere at some 4700m with a cluster of ruins and a temple in the center that is being renovated as well. Here too, the Kushula was delighted to have visitors from Bhutan and went all out to help us perform a meonlam, and a round of butter tea. If you have some money for donation, this is a good place to contribute. It was quite an experience to imagine what Ralung might have been before 1616 from where Zhandrung Rimpoche had come.
The group also visited the towns of Gyantse, Shigatse and Tshethang visiting places such as  Kubum Chorten with a Lakhs of Buddha paintings; Tashi Lhunpo, the seat of the Panchen Lamas; Yubumlagang; Tra Druk Lhakhang, and finally at Samye. Samye is the first Buddhist monastery built in Tibet by Guru Padmasambhava in the 8th Century. The origin of Ging Tsholing Chaam is from Samye where Guru had subjugated the demons on Hepori.
We were also able to get blessings from numerous life like statues, hundreds of golden scripts and great cultural exposures. It was quite an amusement to see Tibetan dance troupes dancing to the tune of Kheng Sonam’s Bumo Tshering Tshomo. Apparently, Dzongkha music videos and songs are quite popular in Tibet.

My adivse for a packaged Tibet a trip is to pack less change of clothings, prepare for high altitude as much as you can. Take advises on drinking enough fluid seriously. I do not remember anyone in the group of 22 not falling sick! There are tons of great Wheat/Barley flours in the market and one do not take an extra effort to carry with you to Tibet. If you need a guidbook, make sure to hide it well or take PDFs or printouts as lonley planet is not appretiated in Tibet. Travel Insurance is recommended which is only done by RICB and do not wait for the last minute. Eldery patients need to do ECG, Blood and Urine tests. Accamalitization at Phojoding or Chelela are good ideas and maybe even starting the trips at Tshethang or Samye are possible options for slow asscend. Tourist vans and hotels does have Oxyen clyinders and first aids on call, but not everyone speaks english or even Tibetan at times.

For offerings to temples, Bhutanese incense is a great idea, which was also recommended by a friend and appretiated. On the first few days, take note of what denominations you are changing your money to. We mistook the Jiao (1/10) for Yaun, while other people had it the other way round. If you want Sinkuees (religious bands that goes around the neck), make sure to take hundreds from Nepal or Bhutan and have them blessed from the Temples in Tibet. Remember that there are not many Lamas to bless the Sinkuees in Tibet. We werent quite successful in getting many Sinkuees from Tibet. Khadars are in adbundance both to purchase from outside or within the temples. 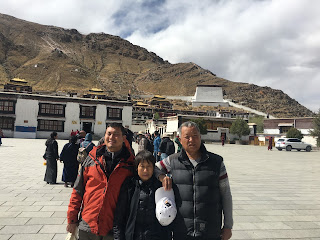 In recent times, we have heard of pilgrims to Nepal and India not being contented with their programs. Me and the group are highly pleased with our pilgirmage to Tibet and the services we have been offered by Adventure Trekking Club. We always had more than 3 Star hotel acccomodation, authentic Tibetan and Chinese meals and everything as promised in the itinerary. It is also to be noted that the group leader himself travels with the group and knows a lot about high atltitude sickness and how to take care of a large group. I cannot imagine myself trying to teach a 50 something year old Bhutanese farmer the concept of time, airport check-in, dining in a 3Star hotel or how to turn on the hote shower! But we do love these comforts at the end of the day! Tashi and the local tibetan guide Tenzinla were extremly knowledgeable of their duties and accomplished everything. I would highly recommend a trip to Tibet for any Bhutanese, if possible, and with Adventure Trekking Club would be complete if you want to feel safe and secure.

We truly commend Thimphu Thromde Team and the Private Waste Collection Companies for the efforts and their initiatives. As far as we understand, Thimphu is one of the few Asian cities where Waste Segregation at Source is implemented. For that matter, even some European and American cities do not have that system yet!
While we already had some observations on the current system, now the Thromde is even asking building owners to place 2 bins for every house all across the city. Our comments on the system are as below;
1.     In most part of the city, wet waste is collected once a week and dry waste twice a week.  Storing wet/biodegradable waste for 6 days is not hygienic and practically a challenge for many families. Perhaps, the collection for wet waste should be twice and once for dry waste.
2.     The wet waste collection system on Norzin Lam stinks a lot with the foul smell and the leachate leaching from the truck in the middle of the street leaving behind dirty marks. Something should be done about the issue.
3.     All families do know about the waste segregation and separate collection days, but we believe not many are aware of the necessity. Most waste and cleaning are dealt by the least educated. It would be necessary to really educate and create awareness on what is biodegradable and what is not, and why we need to segregate them. It would be ideal to have some newspaper or radio or TV advertisements on that for education to achieve better results. Even if there is some, it has to be extensive and persistent.

Now on the proposed system of placement of 2 bins in front of every house. Following are the problems that we anticipate;

1.     Thimphu is renowned for dogs. How are we going to ensure that all bins will be secured properly? We have all experienced even closed bins left out in the street open with the contents out many a times!. This would only get exaggerated with the wet/biodegradable bins lying around for 6 days in front of every house across the whole city.
2.     The bins have to be large enough to accommodate the wet/dry waste for 6 days with only once a week waste collection unless we are talking about daily waste collection by the collection system. The waste will get overflown all over the bins or the owners will have to place large bins that will be similar to the previous communal bins we had in common areas. We all remember the problems with the communal bins with stray dogs, mixed waste and also overflowing. The other problem with larger bins will also be space constraint especially in dense areas such as Norzin lam.
3.     We just found out that the waste collection companies will empty the common building bins. But we know that half of Thimphu’s buildings are off- the road through stairs, footpath and alleys. Practically it would simply be impossible for the collection guys to collect from every house or for the house owners to depute someone to place the bins by the main road. Access to the building bins will be a huge challenge.
4.     As far as we understand, the bins are ordered as the laws requires house owners to be in-charge of the waste collection and that it would help officer goers who miss the waste collection trucks. However, we are worried that the financial obligation would eventually be passed onto the tenants in the form of increased sweeper/bin charges.
5.     Besides that, there are definitely better options for people who miss the 8AM/9AM Waste collection trucks. Why cant we do the collections at 6/7AM or 6/7PM as they do in many other cities? Maybe there should simply be a transfer station or two to do quick rounds of the city.
6.     Passing on one’s burden to someone just does not sound like a reasonable solution as that would only bring in more complications, problems and pose a public health disaster.
7.     By the way, citing the various clauses of the acts selectively also is not convincing. There are many other clauses in various such as the 24x7 Water Supply, clean drains, safe and secure footpath etc that are just lying around unanswered. 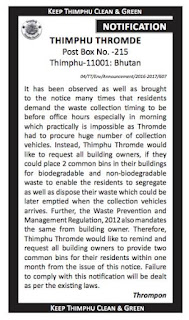 Posted by Chhimi Dorji at 9:18 AM No comments:

Like mentioned in other places. The FDI, Foreign Direct Investment in Bhutan- Documents are really hard to find.
I had to make a phone call and eventually found it on the website of Ministry of Economic Affairs. They actually have a whole division dedicated to FDI. A search on the website will not get you to the document as it is not embedded.

And a bunch of other things http://www.moea.gov.bt/documents/documents.php?Catid=1&unitid=2

I hope this helps!

Posted by Chhimi Dorji at 1:59 AM No comments: 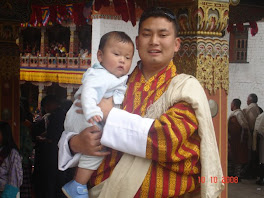